More like April torrential rain today! I feel like this year is already well behind with the cold winter and early spring. Hopefully we’ll get some decent weather and everything will catch up soon.

There’s three main areas of activity at the moment. Firstly the south-facing living room windowsill the best place for young seedlings. There’s a couple of pots of rocket – interesting in exactly the same conditions Runaway is far outstripping Va-Va Voom – Lettuce (Little Gem), Aubergines (Money Maker), Chillies (Joe’s Long), Celery (Morning Star) and Tomatoes (Sungold). All are making good progress and I’ll keep sowing rocket and lettuce every couple of weeks throughout the season. Later in the spring these will be sown direct into a three tier planter that I’m putting near the kitchen door for ease of picking when we need a few leaves. 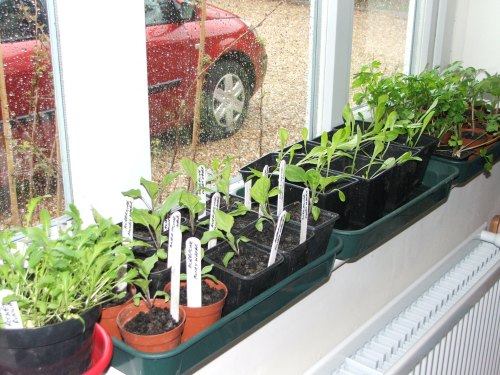 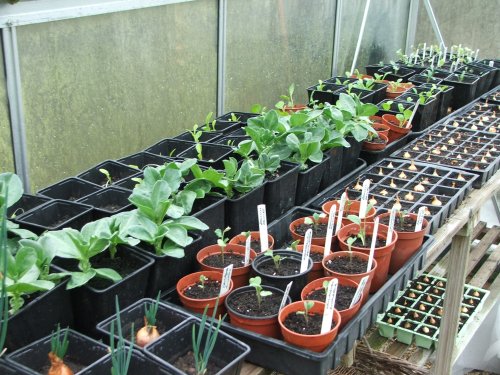 And lastly there’s the pipes that I covered in the last post – and the carrots and parsnips have germinated so the cover is off and each one has the top portion of a plastic bottle protecting the seedlings which I’ll thin down to one in the next week or so. The stump carrots aren’t through yet but should be by next weekend. I’ve started three potato planters with Charlotte and the task of filling the polypots and getting the Kestrel, Winston and Amour out has begun and will be finished next weekend. On the showing front I’m aiming for the NVS SW show which is at the end of August so I have time yet.

I hope you’re all having a nice weekend and managing to get some jobs done despite the miserable weather. Here’s hoping we actually get a summer this year!!

With March and April being the busiest sowing months you’d expect there to be loads of seedlings growing on at the Two Chances Plot. And you wouldn’t be wrong. Here’s a few progress photos from the three growing areas; the greenhouse, cold frames and good old windowsill.

The sweetcorn is growing on well in the greenhouse. Two varieties, Earlibird and Lark, around 40 plants destined for the allotment towards the end of May, possibly earlier with bottle cloches if I need the space in the greenhouse.

Brussel Sprouts (Bedford) hardening off in the cold frame. Around 150 plants for the shared plot, possibly a few for the Hort Soc plant sale. Even though they are one of my favourite veg I think 150 may be overdoing it a bit! 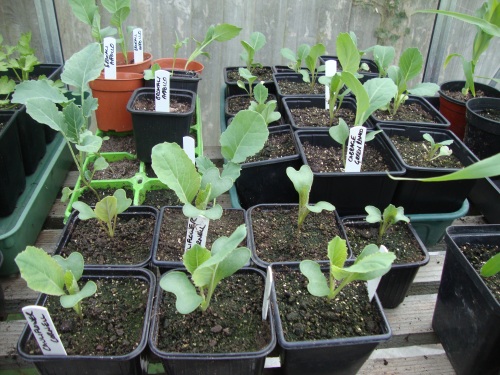 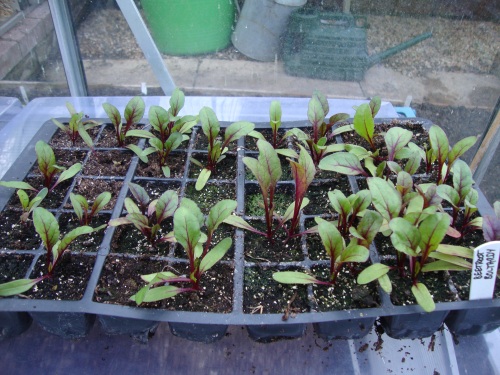 I grow beetroot in modules ready to plant out. This is Boltardy and I will be sowing Pablo later.

The cucumbers (Carmen) are just starting. I’ll be devouting the greenhouse to them this year with the tomatoes outside in the mini-greenhouses for cover with the rest at the shared plot greenhouse.

Last, and defintely least, aubergines (bonica F1). After a disastrous performance last year I’ve been suckered into trying them again. No doubt only bitter disappointment will follow but that’s gardening, without failure you can’t fully appreciate your successes.

In various states of germination are french and runner beans, leeks, parsnips, courgettes, pumpkins and squash. There’s also celery, pea and onion plants in the greenhouse with lettuce growing on and more lettuce, rocket, radish and spring onions sowed. In the garden there’s potatoes, carrots, parnsips, peas, cabbage, shallots, onions and garlic growing away with PSB coming to an end. On the shared plot there’s potatoes, broad beans and onions with a few of last season’s cabbages and cauliflowers left. And the half allotment has so far been planted with more potatoes, broad beans and asparagus.

I think it’s going to be a busy year!!

I’m lucky to have gained a greenhouse when we moved in next to which I’ve built three raised beds which form the main part of my plot at home. At this time of year it’s invaluable to grow on seedlings and take pressure off the indoor windowsills which can get a little crowded.

There’s onions (from Darren), beetroot (Boltardy), peas (show perfection), mangetout (oregon sugar snap), broad beans (longfellow and an unknown variety), leeks (porvite), celery (from Darren), sweetcorn (lark and earlibird), cabbage (green ramco), cauliflower (cornell), brokali (appollo) and calabrese (aquiles F1) all jockeying for space. I’m converting the growing area on the other side of the greenhouse into a space for salad veg and I’ll be growing cucumbers (carmen) from the staging over the roof in the summer. My tomatoes (goldstar) will go into 3 mini-greenhouses in a narror bed by the side of the greenhouse.

As tradition dictates Easter weekend is potato planting time. Whilst waiting for a potato mix to arrive for my show potatoes which I’m growing in bags (Casablanca, Bonnie & Kestrel) I need to get on and plant the rest. I’d like to put some in my allotment as they’re good for working the ground which was pretty compacted when I took over. Most of the seed potatoes I have are 1st and 2nd earlies, Aarron Pilot, Lady Christl, Charlotte, Salad Blue with Pink Fir Apple as well. So planting now will mean some lovely spuds to eat in late July through to September.

The only problem I have at the moment is celeriac germinating. I was given a few seedlings last year which I grew on and we really liked the taste. So I bought a packet this year but I can’t get any to germinate – a bad packet or user error? Any tips for me?

Whatever you’re doing this weekend I hope you have a lovely Easter!

It was time to harvest the greenhouse this morning:

There’s a cucumber (Carmen), tomatoes (Moneymaker, Gardener’s Delight, Golden Peardrop), Peppers (Denver, Annaheim) and Chillies (Cayenne, Patio Apache). Not a bad harvest, the peppers and chillies in particular have done really well this year. I’ll bag the chillies up and pop them in the freezer to use later in the year. And the tomatoes and peppers will go into some pasta creation later today.

Hope you’re all enjoying the weekend.

I spent the morning finally sorting out the greenhouse.

The tomatoes are moneymaker, gardener’s delight and golden peardrop in bottomless pots on a bed of gravel lined with plastic. The idea being that the gravel bed acts as a water retaining reservoir that the tomotoes longer roots can reach. And the pots themselves are watered with a liquid feed that’s taken up by the plants more fibrous roots. At the end of the greenhouse are two Carmen all-female cucumbers and around the edges of the beds are lettuce (lollo rosso, tom thumb and salad bowl), basil and french marigolds. The smell from the basil and marigolds should ward off the whitefly through the summer.

On the staging are the chillies (cayenne, cheyenne, scotch bonnet, apache), peppers (bell boy, redskin, leteus, denver, etiuda) and aubergines (bonica). I’ll take the shelves out of a couple of the mini-greenhouses and grow the spare tomatoes in end-on grow bags. I’m glad to get another job crossed off the list and everything looks a bit tidier now. Hope you’re having a good weekend!

The spate of Bank Holidays have meant lots of work in the garden interspersed with the odd BBQ or three! So I finally got round to building the two mini-greenhouses that Rachel bought for me very cheaply at the end of last season. They’ve joined the one I already have as an overflow to the 8’x6′ cold greenhouse. I positioned them between the greenhouse and the fence, a gap just big enough for them, which also meant blocking off a favourite path for the girls to run round – but running round between a fence and a load of glass wasn’t fun for me watching an accident in waiting! A lot of people have had trouble with these things blowing away, I’ve got mine in a very sheltered position but have also driven an iron rod into the ground and hooked it over one of the shelves so there’s no chance of them going anywhere.

Yesterday I sowed leeks, more dwarf beans, more marigolds, alyssum, poppies and rudbekia. The crunch will come when all of them need pricking out, I’ll be out there for days with the amount I’ve sown!

The tomatoes are looking good, this is the first batch, the first true leaves are just appearing on the second. With the recent weather it’s tempting to plant out some of the tender plants to make more space inside. I think Spring will have a sting in the tail so be warned, don’t put them out too early!

Hope you all have a great Bank Holiday!!

With the warmer weather truly settled in for a few days it’s time to sow, sow, sow here at the Two Chances Veg Plot. With Rachel away in London I’m looking after the girls so what better way than getting them to help me in the garden. I use the term ‘help’ very loosely indeed – so while they were ‘helpfully’ raking the gravel from the path onto the lawn and tipping soil onto the plants, not to mention trying to scoop water from the watering can with an empty plant pot and trying to drink it whilst it leaked from the bottom all over them – I got on with some sowing.

The greenhouse is filling up nicely……..

Growing away on the plot are parsnips (gladiator), carrots (sweet candle), onions (radar), shallots (hative de niort and golden gourmet), garlic and broad beans. Last year’s leeks and parsnips are coming to an end and the PSB is just coming into its’ own to fill the gap. More parnsips and carrots have been sown direct along with lettuce, radish, beetroot and spinach. And all the first and second early potatoes are in.

Talk about hectic!! But it’s great to see everything coming up and looking healthy and green. It’s going to be a great harvest this summer I hope!

And there’s some lovely spring flowers in the garden as well. I’m going to take a break later to watch the Grand National having placed my annual bet on Ruby Walsh, an each-way on State of Play and the pot luck work sweepstake pick Calgary Bay. Have a great weekend!