And the award goes to……

2010 was a busy year here at Two Chances Veg Plot. So which veg gets the awards this year? Here’s my round-up of the best and the worst……..and how they compared to 2009.

Top 3 Veg
1) Late Purple Sprouting Broccoli, we waited and waited and eventually it appeared and boy was it worth the wait. Fantastic eating and filled the March-April ‘hunger gap’. Very satisfying after the the 2008 pigeon disaster – net at all costs.
2) Parsnips “Exhibition” – better than 2009s Tender & True and just fabulous straight from the roasting tray. Yes they’re in the ground for 8 months+ but well worth the investment in time and space.
3) Courgettes “F1 Orelia & Black Beauty” – summer powerhouse veg, very little work other than remembering to harvest, and provided easy meals simply roasted or thrown into a pasta bake, souped, relish etc. Don’t moan about this profilic veg, you’ll miss them in winter.
2009 was Brussels, Cucumber and Courgettes. 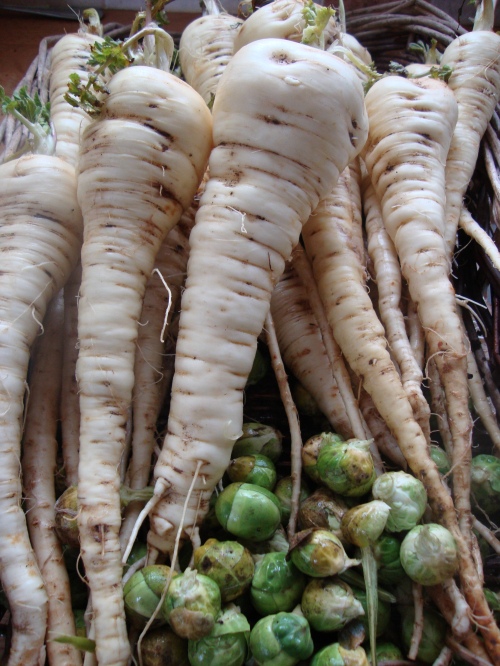 Parsnips and sprouts were good this year.

And the worst……
1) Onion Sets “Radar” – pitiful golf-ball sized excuses for onions – not enough water spring / early summer?
2) Garlic “Purple Wight” – where did it go? Planted too late, no cold snap to break dormancy? Some has appeared this Autumn.
3) Carrots “Javelot” – had a crack at growing some long carrots which were pretty rubbish. Crammed too many into the bin? Will try again next year.
2009 was carrots (there’s a trend developing!), Parsnips and Leeks (I haven’t even seen my leeks since I planted them round the corner in a neighbour’s plot so can’t comment yet!). 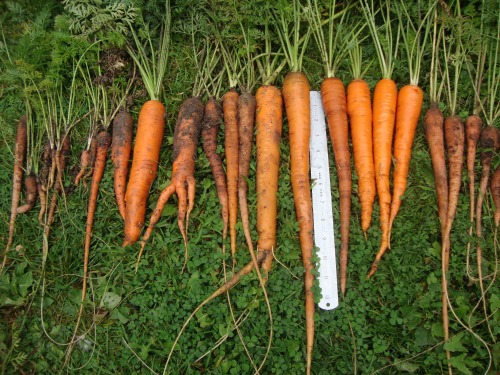 My carrots were rubbish!

Veg I should have grown
The humble Swede………back on the list for 2011.

Biggest Mistake
Transplanting cucumbers from windowsill to greenhouse too early – lost my prized variety “Carmen” that did so well for me in 2009 and went for a non all-female variety as a back-up which wasn’t as good. Don’t sow too early.

Showing Success
I had a successful Summer Show at my local Horticultural Society show. Took cups/medal for most points veg and most points overall veg/flowers. I’d like to branch out a bit this year and do more local shows.

With temperatures soaring into the high twenties I decided to go for it today and get everything planted out. So in went the courgettes, squash, celery, runner beans, french beans, cabbage, sprouting broccoli and kale. 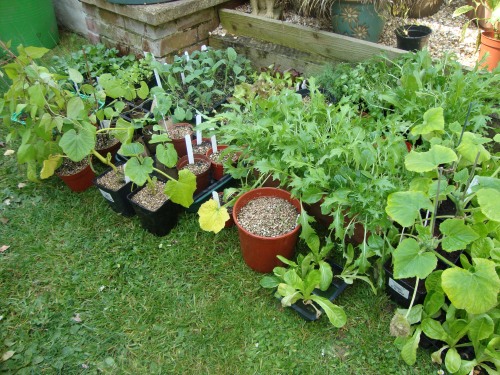 But first I had to mow the lawn and then get some of the bedding plants in. I started by emptying 3 stone baskets we have on the front verge by the road. I filled them up with fresh compost and planted a mix of bedding plants in them. Petunias, Busy Lizzie, Gazania, Pansies and Antirrhinums all went in which should give some nice colour and make the front a bit more presentable. The rest of the bedding will go along the edges of the drive entrance and wherever I can find a space in the flower beds.

Next it was onto the front bed which I built recently and was half full with brussel sprouts, beetroot and sweetcorn. In went some squash (Scallop Mixed and Sunburst) around the sweetcorn (Sweet Sensation), about 10 celery plants (never grown celery before), a couple of rows of cabbage (Golden Acre Primo) and some early white and late purple sprounting broccoli.

Then onto the other beds. The kale (Scarlet and Dwarf Green Curled) went in alongside the spring cabbages (as soon as they are ready for harvest I’ll start replacing with another batch of calabrese and cauliflowers). I earthed up the spuds and ripped out most of the sprouting broccoli at the back of the large bed. It had started to flower. As you can see from the photo they were huge, this one is 7 foot tall.

This is were the beans were to go. Not ideal as you’re supposed to have a trench running over winter getting filled with kitchen waste. I dug a trench anyway and chucked my last bag of well rotted chicken manure in along with some pellets, I’m hoping that will be enough to feed the beans. Up went the A-frame of 8ft bamboo canes and in went 4 runner beans (streamline) and six french beans (blue lake). I planted a runner per cane and 2 French beans per cane. Around the spare canes I sowed some more french beans (our house prefers them to runners).

In the front bed there are strawberries, raspberries, a gooseberry and blackcurrant bush. Along the house wall I’ve planted a row of gladioli (Mexico & Passo) which are starting to poke through. The rest of the space was filled with Squash (Scallop Mixed) and Courgettes (Zuccini, Black Beauty and F1 Orelia).

Then I turned my attention to the onion bed which has been subject to some unwelcome visitor over recent weeks. I’ve narrowed it down to a rat, next doors cat or my dog Polo, so I fenced off the bed last weekend to fend off the cat and dog and some rat poison went down under next door’s shed. Some of the onion sets have been dug up so I chucked them and made sure the rest were well in and had some fresh soil around them. I also removed the soil around the shallots which are coming on really well. This will allow them to form, I may also remove some to allow the rest to grow bigger.

I thinned out the parsnips.

In the greenhouse the tomatoes are in their bottomless pots on a bed of gravel (ring culture) and some will go outside in grow bags next week. There’s also chillies and peppers, aubergines and my back-up cucumbers are coming on, the first batch sucumbed to the cold.

The herb area is looking good. It’s handy having it by the back door and I also put the mixed salad there so it’s easy to get to. There’s flat leafed parsley, basil, chives, rosemary, bay, oregano, sage and thyme which will brighten up our cooking over the next few months.

I really pleased with these dahlias. I’m growing these in pots, I have some more tubers in the front flower bed and some grown from seed to go in.

Elsewhere in the garden the clematis are starting to flower.

And the rockery is in full bloom.

So a busy day. All the beds are full now until the spring cabbage come out and I’ve still got leeks and pumpkin to plant out and swedes to sow. A friend up the road has some space so I may have to plant them out there. Now time to put my feet up and enjoy it, barbie tomorrow I think!

Well 2009 was a big year with the arrival of our 2nd daughter, Emily. I can’t believe that was nearly 12 months ago, wow how time flies!

2009 was the first proper year of my veg growing and I’m been thrilled with how well it’s gone. The family have eaten every type of vegetable that I have grown, nothing has failed although some have been more successful than others. The only thing still to harvest is the purple sprouting broccoli, I hope it’s survived the snow of the last couple of weeks and we can look forward to tender purple spears for the first time!

My Top 3 most successful veg 2009 were:
1) Brussel Sprouts, I can’t believe how many sprouts you can get off just half a dozen plants. We’ve been picking them since November and still going!
2) Courgettes, with the mild Autumn they produced from mid-May right through to the end of October – 3 plants gave us all we could eat.
3) Cucumber – great variety, 2 plants in the greenhouse produced cucumbers from May, the last one picked early November.

My 3 least successful veg:
1) Carrots – pretty useless harvest, I need to rethink my tactics!
2) Parsnips – good harvest but variety was smaller than I expected, I’ve picked a different variety for this year.
3) Leeks – variety wasn’t as big as I’d expected, a new variety this year I think.

Resolutions for 2010:
1) Get my eldest daughter, Chloe, more involved. She’s 3 this year so is old enough to have her own mini-patch. Also I’ve got a much better idea of what she likes to eat so I’ll be planting a lot more cauliflowers this time round and calabrese for the first time.
2) Root veg, I need to do better on the parsnips and carrots, both for the table and exhibitions.
3) More showing, I really enjoyed entering my local Horticultural Society’s Summer Show and I’d like to do more this year.

What a miserable week, downpour after downpour.  Not much that can be done on the plot in this weather but I’m still harvesting the winter veg, some brussels, cabbage, swede and kale.  Apart from booking next year’s holiday (Brittany) sanctuary can be sought in ordering seeds for next year.  You can get great discounts on seeds if you are a member of your local Horticultural Society or Allotment Association, last year my local society achieved a 50% discount on the catalogue price.  I have plenty of seeds in store and most should be good for next year, but I always need to replenish the stocks and it’s the time of year when you can start planning how the plot will look and reflect on what went well this year and what you will do differently next.  Our society uses Dobies who have a great selection of seeds and plug plants to choose from.  Other good options are Thompson & Morgan, Suttons and Mr Fothergills.  So get cracking and get your order in! 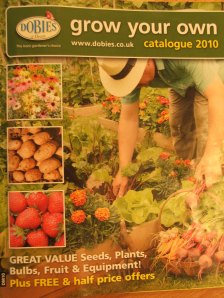 Well a lovely mild October has turned into a horrible wet November and my plans for getting in some veg to over-winter have been scuppered for now!  Last year I planted shallots (Grisselle) and onion (Radar) sets, garlic (purple Wight) and broad beans (Sutton) all in November.  All grew really well, within a few weeks the beans were a few inches high and the sets had lovely green shoots on them that saw them right through the winter including a pretty heavy snowfall in February (for Salisbury area that is – we don’t often see snow around here!).  We were eating broad beans in April and the onions, shallots and garlic were lifted at the end of June (some of the garlic and shallots are still in store).  This time round I’m tempted to leave it until March, if it dries out over the next 2 or 3 weeks I may have a go.  When I plant my sets I raise the soil up into a long mound and put the sets in about 4″ apart – the theory with the raised soil is more warmth and better drainage.  I then cover the area with low net to keep the birds off, removing when the shoots are a few inches high.  Well worth getting what you can in now as you reap the benefits next spring and have an additional area for sowing around July time when you lifted the onions.  I’ll post some photos if I manage to get them in in the next few weeks.

Veg currently in the ground on the plot are leeks, carrots, spring & savoy cabbage, purple sprouting broccoli, kale, chard, swede, brussel sprouts, parsnips and butternut squash.  All can be harvested now bar the purple sprouting which will be ready in late winter/spring (really looking forward to that as last year’s crop was devasted by caterpillars and pigeons – not this time round, the crop has been netted and plants range from 3-6′ high already.  We ate the first of the brussels the other day and they were superb, well worth the wait!