The temptation at this time of year, with the greenhouse stuffed full of plants, is to get everything out into their final positions.  A word of warning though, a late frost can strike, even down here in the balmy south it can come calling up to the end of May.  It’s forecast for tonight so I’m on frost protection duty later covering any susceptible plants with fleece and newspapers – thankfully it’s only my potatoes and dahlias that I need to worry about!

My father kindly built this potting shed for me whilst we were away on holiday last year. It comes off the north facing end of the garage and was a piece of unused land up until that point. During April and May it’s my main workstation where plants are sown, pricked out and potted on. An invaluable space that gives some protection from the weather whilst allowing me to be outside with the greenhouse door only a few feet away. 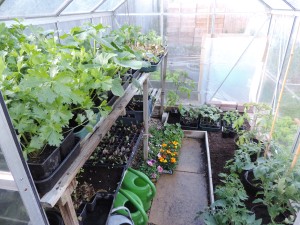 As you can imagine the greenhouse is pretty full now. I’ve started to put the tomatoes – Alicante and Gardener’s Delight this year – into their final positions. There’ll be a couple of cucumbers at the end of the bed eventually. The tender crops – celery, beans, courgettes, pumpkins, squash – are all waiting to go out. There’s also some bedding plants to sort out as well. In a couple of weeks I’ll be left with the chillies, peppers and aubergines in pots on the staging with the tomatoes and cucumbers in the raised bed on the other side of the greenhouse. It’s amazing what you can fit into an 8′ by 6′ space. 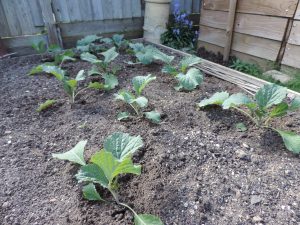 I have a few Savoy Cabbage that are starting to take off. Cabbage is a much maligned veg but I love them and will always eat plenty of cabbage and caulies through the year. 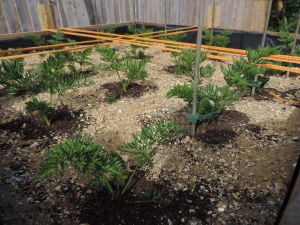 You’ll remember I sowed parsnips and carrots in February. They’re starting to come on now and I’m hopeful they’ll be ready for the New Forest Show at the end of July.

The parsnips are getting strong now. 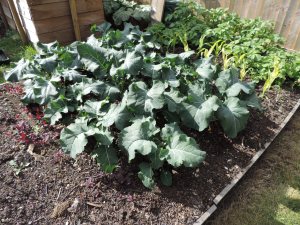 And finally my favourite veg for next month is broccoli and I’m looking forward to a good crop from this little lot. I plant quite close (9 inches) due to space limitations but I’ve found I still get a great crop. Cut the main head first then harvest the side shoots. Keep cutting before any of the heads flower to prevent a bitter taste developing. Can be frozen if you have too much!

That’s all for now, hope your growing season is going well with the promise of some fantastic harvests this summer.