Regular readers will remember that I finally got round to building a proper compost heap at the end of August, using the Quick Compost method that I’d learnt during a talk by gardening expert Ray Broughton. 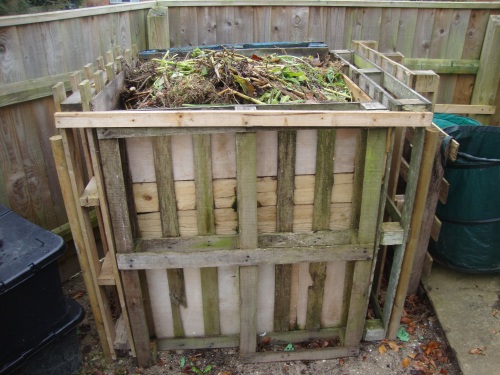 Well after 3 months it’s full and ready for the final layer of soil and fertiliser before I leave it to cook down over the winter. I’ve been amazed at how much material I’ve been able to cram into this four foot square space. Virtually everything from the garden and plot has gone in, I’d recommend it to anyone who hasn’t already got a compost area. By April I’m hoping to have some lovely compost to spread around the plot and allotment.

And I’ve also taken delivery of 8 75litre bags of Levington’s F2+S which will go into my carrot mix for next year’s assault on the NVS Southern Championship at the New Forest Show. Fingers crossed!

I’ve had quite a busy weekend in the garden doing a couple of hours of weeding at the shared plot which had got a bit overgrown. There’s still carrots and beetroot going strong up there with cabbages, parnsips and brussels coming on nicely. And I finally got round to planting my onion sets today, a bit later than usual, but it’s been such a mild Autumn I’m sure they’ll be fine. This year I’m growing two varieties Troy F1 and Electric, a red onion that I’ve never grown before. There’s 50 of each and they fit in a space roughly 6 foot square planting 5″ apart in rows spaced at 10″ so I can get the hoe around them in the spring. 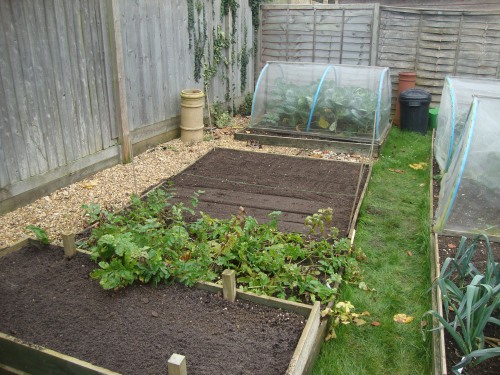 There’s not much left in the home plot now, a few parsnips and some brussel sprouts in the small bed. There’s also cabbages, kale and leeks with onions, shallots, marrows, squash, pumpkins and potatoes in store. 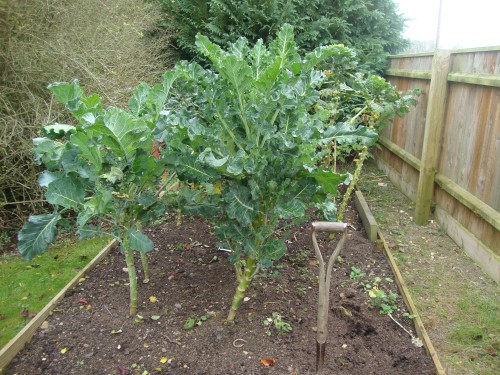 I’m looking forward to some purple sprouting broccoli in spring as there’s three strong plants around four foot high that should survive the winter.

Finally I cut down the Dahlias and, rather than lifting them as I did last year, I’ve covered the tubers in some spent potato compost which I’m hoping will insulate them enough to get them through the winter. And the girls had a great time digging in the mounds of soil.

It’s been a great year on the veg plot with plenty of successes and a few failures thrown in. More about the highs and lows of 2011 next time. Hope you’re all having a good weekend.