There’s been a real change in the weather over the last week, an autumnal feel of cold evenings and nights. It’s one of my favourite times of year, change is in the air, and the veg being harvested starts to change as well.

The greenhouse is coming to the end of its’ productive phase with the last of the tomatoes, peppers and chillies being harvested.

I’m really pleased with my leeks this year. I planted 66 of them in the area vacated by the shallots at the end of May. They were tiny – here’s a picture in my post “Old Fashioned Veg” if you can see them! But in 4 months they’ve grown to a decent size.

The parsnips are pretty good too. We like to roast them along with beetroots, garlic, potatoes and carrots. Whilst the frosts haven’t come yet two or three days in the fridge chiller box does the same trick. Lovely and sweet.

And lastly one of my favourite veg – beetroot – are still going well, if a little large now. They’re so easy to prepare, wash, top ‘n’ tail, roast with skins and all. If you eat as many as I do your pee will turn red!

I hope you’re enjoying the changing season as much as I am and your plot is still giving plenty of delicious veg!

I completed my first ever charity bike ride this weekend. The “Ride on Nelly” Tour de Test Valley sportive has 25, 50 and 100 mile distances to choose from and is based in Grateley, near Andover, Hampshire which is just up the road from me. This is the second year and it was supported by over 800 riders – they raised in excess of £60K last year which all went to their charity CALM which is set up to prevent male suicide which is sadly the biggest single cause of death in men aged 20-49 in the UK. The ride is in the memory of Nelson Pratt, a pro-snowboarder and keen cyclist, who tragically died in June 2012 and is organised by his family and a gang of volunteers.

What a fantastic event it was. Known as the “friendly sportive” this was not a competitive race but a friendly cycle through the beautiful Hampshire countryside. So it was a perfect way to try out cycling with other people – having only ever been out with one other person on my bike before and more often than not cycling on my own early on a weekend morning. Although it was on “open roads” most were quiet country lanes and there was only the odd main road to cross which tested my ability to clip in and out of the pedals!

We’d had horrendous rain for two days prior to the ride which made the road conditions quite bad, particularly the first half with lots of mud and gravel patches that had been washed into the road. There were many punctures each one I met was greeted with a friendly “you alright mate” offer of help to which there was a thumbs up or a “I’m OK mate” as riders were getting on with fixing their bikes. Quite a few people were in pairs or groups so had help at hand should a puncture happen. I succumbed at the 30 mile point and pulled over to fix my bike. Fortunately it was only a 100 yards from the food station so I took advantage of the track pump to get my tyre back up to the maximum pressure. The weather on the day was murky although dry with no wind so conditions although a bit damp weren’t too bad.

I’d chosen the 50 mile route which is further than I’ve ever cycled in one go so I was a bit nervous at the start but soon got into it which was helped by the very friendly nature of the event and fellow cyclists. The food station was very welcome indeed with fantastic chocolate brownies and a cup of tea. And it was great to turn into the last 100 metres with a few spectators clapping and cheering me home!

There was a hot meal for every rider at the end – I choose a lovely veggie curry – together with a goodie bag. A chap I’d been cycling with during the first part of the ride bought me a pint of cider from the beer tent so all was good. As we left the band was playing and it looked like quite a few people were settled in for a well earned party. We were off to friends for a much needed roast dinner and I will definitely be back next year!!

Posted in Nothing to do with Gardening

Some of you may remember I started a project a few months ago to convert part of the front garden into a vegetable growing area. This was the far end by the road which had an old 12ft by 6ft raised bed surrounded by conifers and a very large and quite dead bush.

By the halfway point of the season the trellis fence had gone in separating the area from the main garden and two of the beds were up and running, one with beans and the other with Brussels, swede and squash. My father had made the beds up and I then moved them into position, leveled them up and lined the insides with black plastic for a bit of extra protection. 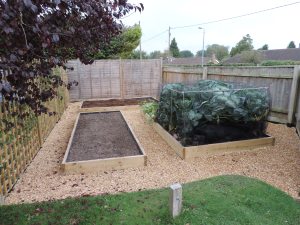 I eventually got round to digging out the paths, putting down a weed membrane which I then covered with 10mm shingle. I’m really pleased with the results. It’s turned an area that we didn’t use and looked a bit disheveled into a lovely, practical space that I like to spend time in!!

Today was our District Association show which, for the first time, we’ve moved from the Tuesday evening “mini-show” format to a full blown day show. We weren’t sure what response we would get but we weren’t disappointed with the turnout and the standard of entries was excellent, a really good competition.

A couple of people we’d met at the Corsley Show last month – Ray Scrivens and Harry Godden – came down for the day which for Ray was a 70 mile trip from Gloucestershire, great to see the word was out and they’d made the journey down.

These pictures will give you an idea of the entries. Everyone was tucking into food, teas and coffees during the staging and through the judging. This made it a great social occasion and a good opportunity to share ideas and pick up tips. Afterwards there was a chance to quiz the judges and get their view on what they look for on certain exhibits which I’m sure gave people some pointers for next year.

My favourite class is the long carrots which I won last month at the NVS South West District Association show. I managed to get a set of three from the final half a dozen or so I had left although they weren’t as good as Darren’s who was showing for the first time this year because his carrots were held back by conditions earlier on. I was pleased with a second place. 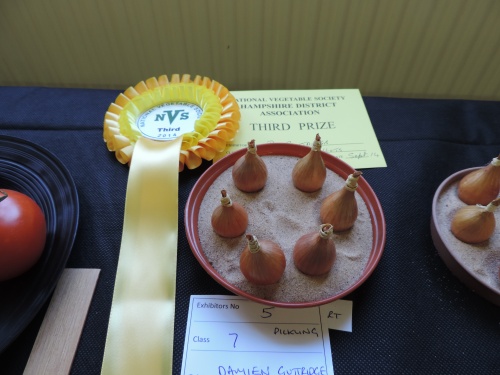 The pickling shallots were the same I entered last month and I picked up a third place.

There were some good quality entries in the shallot and onion classes.

The surprise was my cherry tomatoes – Sungold – the only non-red tomato in the class – which picked up a second. I’d only picked ten the evening before and entered the best six. There was not much to choose between them and the first place but, as I wasn’t expecting anything, I was pleased with the result. 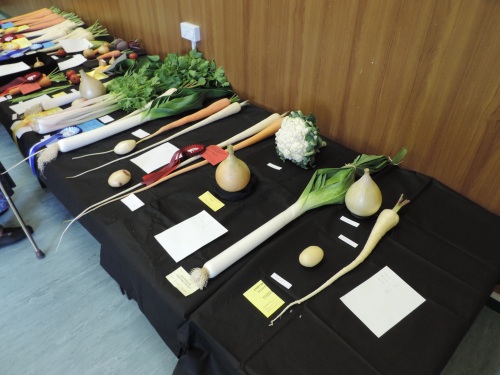 The collection was hard fought with only half a point between Darren and Harry Godden. The class was for three twenty point veg – 1 of each. Darren and I both entered a long carrot, a parsnip and a potato. I was a few points off the pace with 45 out of 60 and out of the places. Darren won with 53.5 points and picked up the NVS Silver Medal for winning this class. He also picked up a first for his set of parsnips proving he is hard to beat when it comes to the long roots, a great show for him when you consider the upheaval of the last year getting set up in his new place.

The stump carrots was another good class.

Any other veg was won by Harry with his leeks – last month at Corsley he won best in show with leeks.

Best in show went to Heather with a great set of Kestrel.

There was also a flowers and pot plants section which included quite a few classes for my favourite flowers – Dahlias. I only wish I could grow them to this standard, they were superb and here’s a few pictures to show you what I mean. You will be pushed to find better as there were some top level Dahlia growers involved. 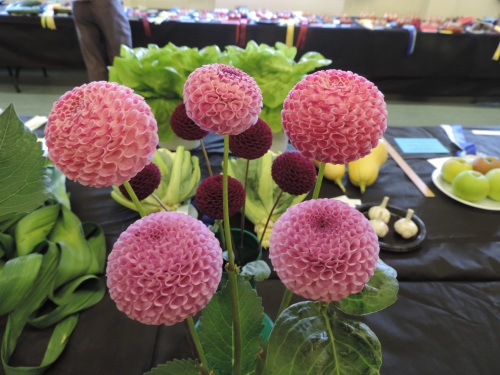 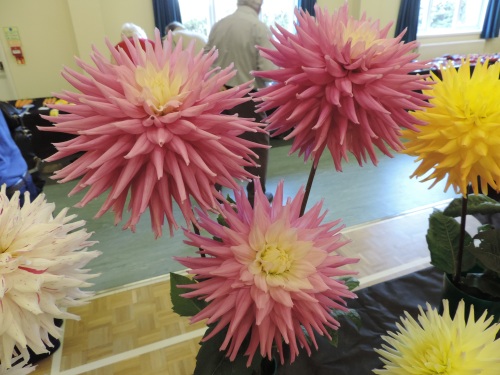 So the end of the season from a showing perspective. I picked up my first NVS red card last month and today I had three more places picking up some nice rosettes. Not bad considering I didn’t have a huge amount to choose from. Unfortunately the exhibition shallots, potatoes, stump carrots, beetroot and any other veg entries didn’t come anywhere but it helped make the show and it’s good to see many classes with 6 or more entries in.

I’m sure this show will go from strength to strength now and be one of the best in the area. It is open to all so if you fancy having a try come on down it would be great to see you next year.

I’ve been pleased with my crop of peppers this year, I think the warm early summer gave them a boost and they’re now cropping nicely.

Regular readers will know I’m a big fan of chillies and am growing three varieties this year. 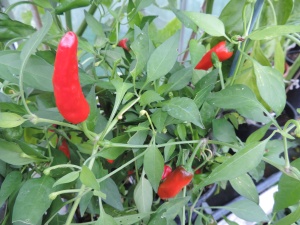 The first is Apache which gives an abundance of small, red, fiery-looking fruits.

And finally one of my favourites, Joe’s Long, with chillies up to 30cm long developing a deep red colour. These are a medium (“madras”) strength and I’m looking forward to seeing what the other two taste like. 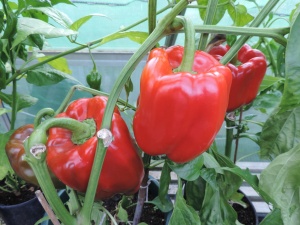 The first sweet pepper I’m growing is Denver which have cropped well(compared to my previous attempts) with 4 to 6 large fruits per plant.

Etiuda is a variety I’ve grown for a few years – from Eastern Europe I think so can stand a colder summer – and gives nice orange fruits.

Lastly there’s Jumbo which is living up to it’s name giving me the largest pepper of the lot.

And here’s this morning’s harvest…………

I’d be interested in any varieties you have to recommend for next year’s sowing. Have a great weekend all.

Although this blog is mainly about growing veg from time to time I wander off into other interests of mine. One of which is hill walking and after finally completing the Pennine Way last year we decided to start The Ridgeway National Trail this summer.

You can read all about our Pennine Way exploits here.

And our first weekend on The Ridgeway can be found here.